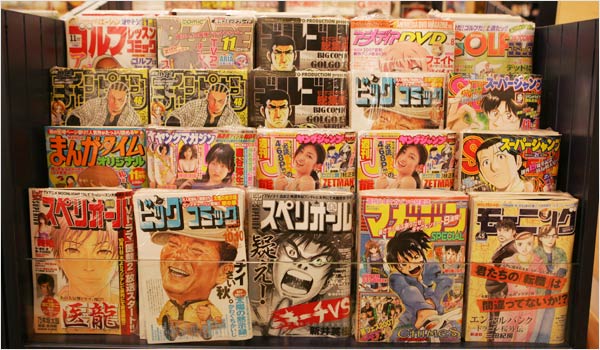 A display at Kinokuniya’s new store overlooking Bryant Park; the old Kinokuniya, at Rockefeller Center, is to close at year’s end.

For 26 years, Kinokuniya, the Japanese bookstore chain, has served New York’s Japanese-language readers from its outlet at Rockefeller Center with scores of paperbacks imported from Japan, hundreds of cellophane-wrapped manga titles and translations of the most recent Harry Potter installment. Now the company has decided that Japanese is no longer the center of its universe.

Skip to next paragraph 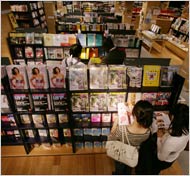 With a new store overlooking Bryant Park that opened last weekend, Kinokuniya is expanding its focus from Japan to all of Asia and beyond. Japanese-language books, which occupy the bulk of the first floor of the slightly worn Rockefeller Center store, have been banished to the basement of the new, airy three-story store on Avenue of the Americas, near 40th Street.

On the first floor, which is serenely decorated in blond-wood flooring and minimalist black shelving, English-language readers can peruse coffee-table books of posters from the Chinese Cultural Revolution, Korean cookbooks and histories of the Middle East. In the literature section, English translations of Japanese novelists like Haruki Murakami and Shusaku Endo share shelf space with titles by Salman Rushdie and Anita Desai and translations of books by the Egyptian Naguib Mahfouz and the Chinese-born Gao Xingjian.

“At the old store the main purpose was to sell to the Japanese community,” said Shigeharu Ono, director of Kinokuniya in New York, while giving a tour of the new store this week. “We want to expand our audience.” He said Japanese-language titles represented about 70 percent of the stock at Rockefeller Center, but he expected English-language titles ultimately would be in the majority at the new location. (Books are also sold online at www.kinokuniya.com.)

With just over 61,000 Japanese natives in the New York metropolitan area, according to the Consulate General of Japan, the niche focus of the old store, which is to close at the end of this year, limited its customer base. Given high rents at Rockefeller Center, said Mr. Ono, “it was always a very tough business.”

But Japanophiles need not panic: The Bryant Park store, one of nine Kinokuniyas in the United States, is stocked with plenty of Japanese-language novels, fashion magazines and a mother lode of manga in both Japanese and English. About a third of the second floor, which also features a branch of Cafe Zaiya, a Japanese-style pastry and sandwich shop, is taken up by packed rows of manga titles. There are also DVDs of popular anime shows like “Naruto” and “Fullmetal Alchemist.”

The new store also includes expanded fashion and art sections in the hopes of capitalizing on its location overlooking Fashion Week headquarters. John Fuller, store manager, said that on the day the store opened, someone from a nearby fashion designer’s office walked in and bought 11 issues of Fruits, a monthly Japanese magazine of photographs capturing on-the-street style.

Mr. Fuller said the new location would hold more events in English than the Rockefeller Center store did. Next month there will be a costume competition, a talk by Brian Camp, co-author of “Anime Classics Zettai! 100 Must-See Japanese Animation Masterpieces,” and a demonstration by Machiko Chiba, a popular cookbook author who focuses on microwave cooking.

On Nov. 20 the store plans to unveil a mural it commissioned from Takehiko Inoue, one of Japan’s best-known manga artists. Mr. Inoue writes and draws the “Vagabond” and “Real” series.

Mr. Ono acknowledged that the store competed for manga readers with Barnes & Noble and Borders.

Jim Killen, the chainwide manga buyer for Barnes & Noble, said it had “a couple thousand” titles in its database in English translation.

Mr. Ono estimated that there were about 1,000 English titles in the Bryant Park store.

But Kinokuniya has one exclusive title: The Japanese translation of “The Secret,” the best-selling positive-thinking self-help book, which doesn’t even go on sale in Japan until Monday.