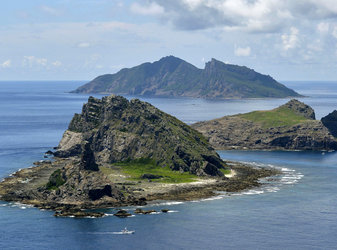 Sleepy Islands and a Smoldering Dispute

A clash over the islands known as Senkaku or Diaoyu, above, has set off worries about the effect on business ties between China and Japan.

Japan: Chinese Ships Approach Disputed Islands
Voice of America (blog)
A group of Chinese government ships has entered waters near Japanese-controlled islands in the East China Sea, as a territorial dispute escalates on the sensitive anniversary of Japan's invasion of China. Japan's Coast Guard says at least 10 ...
See all stories on this topic »
Japan Businesses in China Hit as Protests Rage
ABC News
Scores of Japanese-owned factories and stores in China were shuttered Tuesday as anti-Japanese demonstrations raged in dozens of cities. At stake are billions of dollars in investments and far more in sales and trade between Japan and China, the world ...
See all stories on this topic »

Distinctive Style of Japanese Art Known as Rinpa is Explored in Metropolitan Museum Exhibition
May 26, 2012– January 13, 2013

First Rotation:   May 26- September 9, 2012
Second Rotation:   September 12, 2012 – January 13, 2013
Location:   The Sackler Wing Galleries for the Arts of Japan, second floor
Press viewing:   Monday, September 10, 10 a.m. - noon
Rinpa is a modern term that refers to a distinctive style of Japanese pictorial and applied arts that arose in the early 17th century and has continued into modern times. Literally meaning “school of Korin,” Rinpa derives its name from that of the renowned artist Ogata Korin (1658–1716). It embraces art marked by a bold, graphic abbreviation of natural motifs, frequent reference to traditional court literature and poetry, lavish use of expensive mineral and metallic pigments, incorporation of calligraphy into painting compositions, and innovative experimentation with brush techniques.
The exhibition is made possible by The Miriam and Ira D. Wallach Foundation.
A special exhibition featuring some 90 brilliantly executed works of art created in Japan by Rinpa-school artists will be held at The Metropolitan Museum of Art in two rotations; the first opening on May 26 and the second on September 12, 2012. Highlighting the school’s most prominent proponents, Designing Nature: The Rinpa Aesthetic in Japanese Art  will trace the development of the Rinpa style and demonstrate how it continued to influence artists through the 19th and 20th centuries. Comprising some 50 works from the Museum’s own holdings, as well as some 45 loans from public and private collections on the East Coast, the exhibition will include many masters’ renowned works in a variety of media―painting, textiles, lacquerware, and ceramics.
Works on view in the exhibition’s first rotation will include: an early 18th-century, two-panel folding screen, Rough Waves, by Ogata Korin, depicting highly stylized waves; another 18th-century, two-panel folding screen, The Persimmon Tree, by Sakai Hoitsu, the founder of the Edo branch of Rinpa, revealing the ink-painting techniques he learned from predecessors such as Tawaraya Sotatsu; and a 19th-century pair of six-panel folding screens, Morning Glories by Suzuki Kiitsu, who was Hoitsu’s primary pupil and who captured the exuberant proliferation of the blossoms and leaves.
A centerpiece of the exhibition’s second rotation will be the famous Korin Irises at Yatsuhashi (Eight Bridges), with its brilliant array of clusters of purple irises against a gold background. A hanging scroll by Kenzan, Korin’s younger brother, captures an autumnal mood through a depiction of vivid red ivy and a poem rendered in the artist’s distinctive calligraphy.  An early 17th-century screen of calligraphy by Konoe Nobutada features transcriptions by female poets of the Heian court; on loan from Yale University Art Museum, it will be on public display for the first time.
Along with once-in-a-lifetime displays of masterpieces of painting and calligraphy, the exhibition will highlight rare illustrated books, lacquerware, ceramics, cloissoné, and kimono that demonstrate how the Rinpa aesthetic was transmitted over generations into modern times. Special digital displays of illustrated books by Kamisaka Sekka will be available in the galleries so that visitors can “turn the pages” of early 20th-century books that will be exhibited in cases nearby.
By the late 19th century, the idea of a Rinpa school had become firmly established, both in the Japanese consciousness of a national history of art and internationally. To a certain extent, Rinpa became synonymous with the very idea of Japanese art, since its aesthetic extended to the lacquerware, textiles, and ceramics that were transmitted to the West. Prominent among the artists of the modern age who exemplified the transmission of this Kyoto-based aesthetic into the modern consciousness were Shibata Zeshin, a lacquer artist and painter, and Kamisaka Sekka, who excelled in both painting and print media.
The exhibition will be accompanied by a catalogue.
The catalogue is made possible by the Richard and Geneva Hofheimer Memorial Fund.
In conjunction with the exhibition, the Museum offers various education programs, including gallery talks and a Sunday at the Met on September 30.
Designing Nature: The Rinpa Aesthetic in Japanese Art  is organized by John T. Carpenter, Curator of Japanese Art in the Department of Asian Art at The Metropolitan Museum of Art.
The exhibition will be featured on the Museum’s website at www.metmuseum.org.
# # #
September 6, 2012

From Wikipedia, the free encyclopedia
(Redirected from Rinpa)
Jump to: navigation, search

Spring Landscape, unknown Rimpa school painter, 18th century, six-screen ink and gold on paper.
Rimpa (琳派 Rimpa?), is one of the major historical schools of Japanese painting. It was created in 17th century Kyoto by Hon'ami Kōetsu (1558–1637) and Tawaraya Sōtatsu (d. c.1643). Roughly fifty years later, the style was consolidated by brothers Ogata Kōrin (1658–1716) and Ogata Kenzan (1663–1743).
The term "Rimpa" is an abbreviation consisting of the last syllable from "Kōrin" with the word for school (派 ha?) (with rendaku changing this to "pa"), coined in the Meiji period. Previously, the style was referred to variously as the Kōetsu school (光悦派 Kōetsu-ha?), or Kōetsu-Kōrin school (光悦光琳派 Kōetsu-Kōrin-ha?), or the Sōtatsu-Kōrin school (宗達光琳派 Sōtatsu-Kōrin-ha?).

portion of Sōtatsu's Fūjin Raijin-zu
Hon'ami Kōetsu founded an artistic community of craftsmen supported by wealthy merchant patrons of the Nichiren Buddhist sect at Takagamine in northeastern Kyoto in 1615. Both the affluent merchant town elite and the old Kyoto aristocratic families favored arts which followed classical traditions, and Kōetsu obliged by producing numerous works of ceramics, calligraphy and lacquerware.
His collaborator, Tawaraya Sōtatsu maintained an atelier in Kyoto and produced commercial paintings such as decorative fans and folding screens. Sōtatsu also specialized in making decorated paper with gold or silver backgrounds, to which Kōetsu assisted by adding calligraphy.
Both artists came from families of cultural significance; Kōetsu came from a family of swordsmiths who had served the imperial court and the great warlords, Oda Nobunaga and Toyotomi Hideyoshi, in addition to the Ashikaga shōguns. Kōetsu's father evaluated swords for the Maeda clan, as did Kōetsu himself. However, Kōetsu was less concerned with swords as opposed to painting, calligraphy, lacquerwork, and the Japanese tea ceremony (he created several Raku Ware tea bowls.) His own painting style was flamboyant, recalling the aristocratic style of the Heian period.
Sōtatsu also pursued the classical Yamato-e genre as Kōetsu, but pioneered a new technique with bold outlines and striking color schemes. One his most famous works are the folding screens ”Wind and Thunder Gods" (風神雷神図 Fūjin Raijin-zu?) at Kennin-ji temple in Kyoto and "Matsushima" ( 松島?) at the Freer Gallery.

portion of Ogata Kōrin's Kōhakubai-zu
The Rimpa school was revived in the Genroku era (1688–1704) by Ogata Kōrin and his younger brother Ogata Kenzan, sons of a prosperous Kyoto textile merchant. Kōrin's innovation was to depict nature as an abstract using numerous color and hue gradations, and mixing colors on the surface to achieve eccentric effects, as well as liberal use of precious substances like gold and pearl.
His masterpiece "Red and White Plum Trees" (紅白梅図 Kōhakubai-zu?) c. 1714/5, is now at the MOA Museum of Art in Atami, Shizuoka. A dramatic composition, it established the direction of Rimpa for the remainder of its history. Kōrin collaborated with Kenzan in painting designs and calligraphy on his brother's pottery. Kenzan remained as a potter in Kyoto until after Kōrin's death in 1716 when he began to paint professionally. Other Rimpa artists active in this period were Tatebayashi Kagei, Tawaraya Sori, Watanabe Shiko, Fukae Roshu and Nakamura Hochu.

Rimpa was revived in 19th century Edo by Sakai Hōitsu (1761–1828), a Kanō school artist whose family had been one of Ogata Kōrin’s sponsors. Sakai published a series of 100 woodcut prints based on paintings by Kōrin, and his painting "Summer and Autumn Grasses" (夏秋草図 Natsu akikusa-zu?) painted on the back of Kōrin’s "Wind and Thunder Gods screen" is now at the Tokyo National Museum.
Paintings of the early "Rimpa" artists were anthologized in small paperback booklets such as the Korin gafu (The Korin Picture Album) by Nakamura Hochu, first published in 1806. This was followed by an original work by Sakai Hoitsu called the Oson gafu, published in 1817.
Sakai had numerous students who carried the movement forward into the late 19th century, when it was incorporated into the Nihonga movement by Okakura Kakuzo and other painters. The influence of Rimpa was strong throughout the early modern period, and even today Rimpa-style designs are popular. One later artist of note is Kamisaka Sekka.