The "Tree of Life" sculpture inside the "Tower of Sun"

May 31, 2013
By YOSHITAKA UNEZAWA/ Staff Writer
SUITA, Osaka Prefecture--The interior of the famed "Tower of the Sun" building, one of the iconic images of Expo '70 in Osaka, is set to open on a permanent basis in the fiscal year beginning April 1, 2014.
The work, standing in Expo '70 Commemorative Park in Suita, Osaka Prefecture, is the masterpiece of famed artist Taro Okamoto, who passed away in 1996 at age 84. Inside the tower is the "Tree of Life" sculpture, a piece Okamoto used to depict the evolution of life on Earth.
After the 1970 Osaka Expo, visitors were only admitted inside the tower upon request. When cracks in the walls were found in 2007, the park stopped allowing them in.
The "Tree of Life," surrounded by red inner walls, is a steel construction standing about 41 meters high.
It is shaped like a tree and colored green, blue, red and orange. Various animal miniatures such as gorillas and dinosaurs are affixed to the tree.
According to the Commemorative Organization for the Japan World Exposition '70, which administers the park, visitors to Expo '70 could view the "Tree of Life" while riding up an escalator installed inside.
The organization began in 2003 to admit visitors who submitted a request, but then suspended these visits in 2007 and began conducting inspections.
The organization will reinforce the tower for improved earthquake-resistance during the current fiscal year. It will also build stairs along the inner wall with the goal of opening the attraction in fiscal 2014.
The organization says it will also begin work on reproducing some of the animal models that have fallen off the "Tree of Life."

Asian Tensions and the Problem of History

The political turmoil currently roiling Northeast Asia — a region that should otherwise be basking in success right now — can often seem bewildering to outsiders. One key to understanding, however, can be found in a surprising location: a single recent photograph.
目前困擾東北亞局勢的政治動蕩，往往在外人眼裡看似困惑——這個地區原本可以因成功而洋洋得意。然而，理解這一切的關鍵可以在一個意外的地方找到：在最近的一張照片上。
On May 12, a journalist snapped a picture of Japan’s prime minister, Shinzo Abe, grinning from the cockpit of a fighter jet. Such politician photo-ops are neither unusual nor controversial in the West, where the worst thing they tend to provoke is eye-rolling (think of Michael Dukakis looking like Snoopy in a tank during his failed race for the presidency in 1988, or George W. Bush’s landing on an aircraft carrier in May 2003, and beaming under a banner declaring that the war in Iraq was a “Mission Accomplished”).
5月12日，一名記者拍下日本首相安倍晉 三(Shinzo Abe)微笑着坐在一架戰鬥機駕駛艙中的照片。在西方世界，這樣的政治擺拍頗為平常，也不會引發爭議，其所能引發的最糟的東西就是讓人厭煩（想想1988 年，在以失敗告終的總統競選期間，邁克爾·杜卡基斯[Michael Dukakis]坐在一輛坦克中，看上去像史努比[Snoopy]的那張照片；或者2003年，喬治·W·布殊[George W. Bush]降落在一架航空母艦上，笑容爛燦，他頭上方的一條橫幅寫着：伊拉克戰爭「任務已完成」。）
Not so in Asia, at least not these days: no sooner had the photograph of Abe appeared than howls of anger erupted across China, and one of South Korea’s largest newspapers, Chosun Ilbo, excoriated him for his “never ending provocations.”
但在亞洲，情況就不一樣了，至少近來如此：安倍晉三的照片一出現，中國各地便爆發出憤怒的吼聲，韓國最大的報紙之一，《朝鮮日報》(Chosun Ilbo)對安倍發起猛烈抨擊，指責其「永無止境的挑釁」。 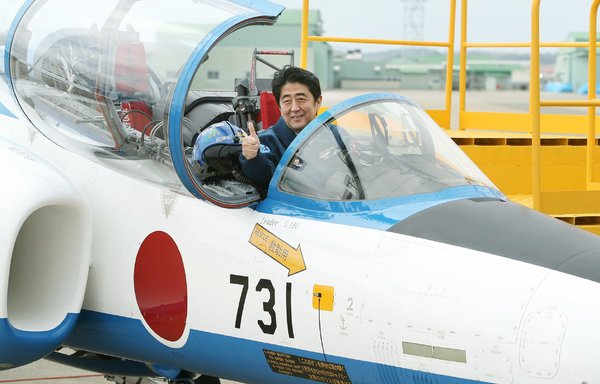