TOKYO — Last week, 57 nations became founding members of the Asian Infrastructure Investment Bank, the China-led regional development bank. Japan and the United States opted not to join, expressing doubts over governance and transparency at the new organization.
Even if the Obama administration were in favor of the United States becoming a member, Congress wouldn’t allow it; lately, it has even blocked a funding increase for the International Monetary Fund that was backed by the G-20. But the National Diet of Japan faces a different situation. The governing Liberal Democratic Party is split over the A.I.I.B.; its members are still debating the pros and cons. Komeito, the L.D.P.’s junior coalition party, and the Democratic Party of Japan, the opposition, are largely in favor of membership.
Japan has long been at the forefront of regional organizations, helping to establish the Asia-Pacific Economic Cooperation forum, the Asean Regional Forum and the East Asia Summit. It is a leading donor of aid to Asia. Japan’s net official development assistance (ODA), combining bilateral aid and contributions to international organizations, exceeded $10.6 billion in 2012, with more than 56 percent going to Asian countries. By contrast, China gave out an estimated $5 billion in annual foreign aid, and only just over 30 percent of that in Asia.The case for Japan joining the A.I.I.B. is simple and strong. By distributing financial assistance to states in the Asia-Pacific, the bank will inevitably help shape the region’s future economic architecture, as well as, implicitly, its security relations. Japan has a major strategic interest in participating.
Japan began its ODA program in earnest in the 1960s, during a period of great economic growth prompted partly by the significant infrastructure investment it had received after World War II. By the 1990s, Japan had become the world’s largest ODA donor. Its activities have been wide-ranging — dealing with environmental issues, sanitation and disaster relief. Japan’s expertise in these areas would be valuable to the A.I.I.B., and to key strategic partners that need infrastructure investment to grow, like Indonesia, Vietnam and Myanmar. If Japan can cooperate with China to assist the development of these nations, it would be contributing to the stability of the Asia-Pacific region as a whole.
Indeed, the A.I.I.B. must be treated as a project that concerns the entire Asia-Pacific region, rather than just Asia. The bank’s decision-making mechanism has yet to be determined, but one proposal is to allocate up to 75 percent of voting shares to “regional members.” That group should not be limited to Asian states to the exclusion of Pacific Ocean nations, as seems to be Beijing’s design. A pan-regional approach is in Japan’s interest, and it can best defend this idea as a member of the A.I.I.B.
Such a comprehensive vision has been Japan’s official strategy at least since the early 1980s, after Prime Minister Masayoshi Ohira promoted Pan-Pacific cooperation. History shows that Japan has veered from this notion at its peril. At the end of the 19th century, Japan was the first Asian state to modernize, and it soon became one of the world’s great powers. But in terms of both identity and strategy, it was caught between Asia, representing the East, and the Pacific, then symbolizing the West.
Feeling excluded by Western nations, in the 1930s, Japan embarked on its own version of the Monroe Doctrine, leading to the second Sino-Japanese war and the Pacific war against the Allied Powers. By refusing to join the A.I.I.B., Japan risks once again drawing a line between continental Asia and the Pacific nations.
It is also in Japan’s best interest to ensure that the main tenets of the liberal international order are respected in the Asia-Pacific region. The Japanese and United States governments are concerned that the A.I.I.B. will be used to benefit corrupt Chinese state-owned enterprises and promote Beijing’s authoritarian-capitalist model of development. Their apprehension is understandable; China does have a spotty governance record when it comes to infrastructure investments. But this is only more reason for Japan, as well as the United States, to join the A.I.I.B.: Both countries stand a better chance of shaping the bank’s rules from within.
Japan is justifiably unsettled by China’s assertiveness in the East and South China Seas, and in response is seeking to strengthen its deterrence capabilities. Yet projects such as the A.I.I.B., which will play a key role in redefining the region’s economic architecture, can be kept separate from territorial disputes and be advanced despite such tensions.
Some Japanese strategists, including analysts at the Ministry of Foreign Affairs, are concerned that joining the A.I.I.B. would hurt Japan’s relations with the United States — and that creating a wedge between the two allies is precisely one of Beijing’s objectives. There are ways of avoiding such a trap, however, including by urgently concluding negotiations for the Trans-Pacific Partnership, the American-led 12-nation trade pact, which excludes China. That agreement will reaffirm the rules-based liberal world order in the Asia-Pacific region.
The U.S. Congress’s decision last week to grant President Obama fast-track authority to conclude the trans-Pacific trade pact is timely. Prime Minister Shinzo Abe must now take advantage of his approaching trip to the United States to convince the Obama administration to finalize the agreement and then to join the A.I.I.B. Japan is understandably wary of China’s growing influence. But the best way to protect its interests is not to snub Beijing’s regional initiatives; it is to help shape them, with the help of the United States, in the hope of creating more cooperative relations with China.
Yoichi Funabashi is chairman of the Rebuild Japan Initiative Foundation, a think tank in Tokyo.
張貼者： hanching chung 於 下午3:16 沒有留言:

A group of prominent panel members including former Editor-in-Chief of The Economist, Bill Emmott, discusses Japan's future role and its strengths and its potential in the post-crisis global economy.
GLOBAL AGENDA
The Sun Also Rises? Japan’s Potential in the Post-Crisis Global Economy
April 25 Sat. 9:10 / 15:10 / 21:10 (JST)⋯⋯
更多

Tokyo (CNN)A bizarre and alarming discovery is raising concerns in Japan about the potential for terrorism involving drones.
A drone carrying traces of a radioactive material was found on the rooftop of Japan's equivalent to the White House on Wednesday, police and government officials said.
The discovery came on the same day a Japanese court approved a government plan to restart two reactors at the Sendai nuclear power plant in Kagoshima prefecture, more than four years after the Fukushima Daiichi nuclear disaster.
Prime Minister Shinzo Abe's push to restart the reactors is unpopular among many Japanese, who view nuclear energy as too dangerous.
A staff member spotted the drone Wednesday morning on the roof of Abe's residence, Tokyo Metropolitan Police said. 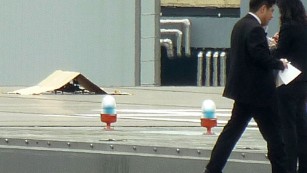 Prime Minister Shinzo Abe was in Indonesia at a conference when the drone was spotted.
EXPAND IMAGE
Dozens of police investigators were dispatched to the roof to investigate the origin of the drone, which had four propeller and was 50 centimeters (20 inches) wide.
Police say the drone was equipped with a small camera, smoke flares and a plastic bottle containing small traces of a radioactive material believed to be cesium, a common byproduct of nuclear reactors.
Cesium was also discovered in areas around the failed Fukushima Daiichi nuclear plant after its 2011 meltdown.
Investigators suspect the cesium was placed in the bottle. The amount inside is not immediately harmful to humans.
Chief Cabinet Secretary Yoshihide Suga said the discovery is raising concerns about terrorism.
"There might be terrorism attempts in the future at the Olympics and G7 Summit using drones," Suga said. "So we need to examine and review continuously the way small unmanned vehicles like drones should be operated and how to cope with the threat of terrorism from drones. The government will do all that we can to prevent terrorism."
Japanese law restricts drone flights around airports to prevent problems with aircraft, but there are no flight restrictions for most of Tokyo, including the Prime Minister's residence and local and federal government buildings.
Abe was not in his office at the time. He is in Indonesia, attending the Asian-African Conference.

How billion dollar companies are made

George Lucas gets payback on neighbors

How some companies dodge taxes

This number controls your finances

How billion dollar companies are made

George Lucas gets payback on neighbors

How some companies dodge taxes

This number controls your finances