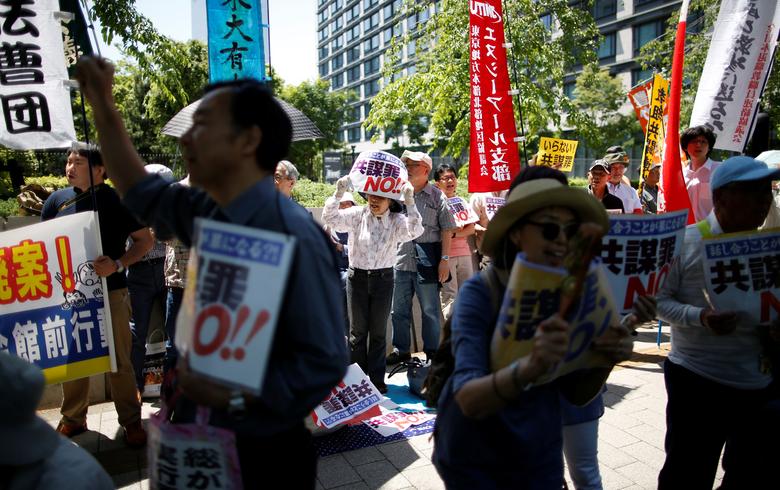 Protesters shout slogans as they protest against an anti-conspiracy bill outside parlliament building in Tokyo, Japan May 23, 2017. REUTERS/Issei Kato

The lower house vote, held despite opposition party protests and concern raised by a U.N. expert, sets the stage for enactment after approval by the upper house, where the ruling coalition also has a majority.

Japanese governments have tried three times without success to pass similar legislation, which officials say is needed to ratify a U.N. treaty aimed at global organized crime as well as to prevent terrorism as Tokyo prepares to host the 2020 Olympics.

Speaking after what British police believe was a terrorist attack in Manchester on Monday in which at least 22 people died, Chief Cabinet Secretary Yoshihide Suga stressed the need for the changes to facilitate coordination with other countries.

"We would like the legislation enacted as soon as possible," Suga said.

Opponents, however, see the legislation of part of a broader agenda by Abe to increase state powers.

Despite government assurances to the contrary, opponents fear ordinary citizens could be targeted. Critics say that combined with a widening of legal wiretapping and the reluctance of courts to limit police surveillance powers, the changes could deter grassroots opposition to government policies.

Hundreds of mostly elderly protesters gathered outside parliament to voice their opposition.

"If you are more likely to be monitored and arrested, you would shrink from citizens' movements."

The legislation would criminalize plotting and preparing to commit 277 "serious crimes" that critics such as the Japan Federation of Bar Associations note include acts with no obvious connection to terrorism or organized crime, such as sit-ins to protest construction of apartment buildings or copying music.

"We must not allow the creation of a surveillance society," the lawyers group said in a statement.

Last week, the U.N. special rapporteur on the right to privacy, Joseph Cannataci, wrote to Abe asking him to address the risk that the changes could "lead to undue restrictions to the rights to privacy and to freedom of expression".

Suga lashed back on Monday, calling the letter "clearly inappropriate" and adding Tokyo had protested. Cannataci responded by calling Suga's remarks "angry words" with "no substance" in an email to Reuters.

A Kyodo news agency survey published on Sunday showed voters are split over the bill, with support at 39.9 percent and opposition at 41.4 percent.


In Japan, prime minister pushes ahead with controversial ‘anti-conspiracy’ bill


By Anna Fifield May 22
TOKYO — The Japanese parliament appeared ready Monday to move toward approval of a sweeping new “anti-conspiracy” measure that the government says is needed to stop terrorist attacks but that critics worry will be used to create a surveillance state.
The bill is part of a broader push by Prime Minister Shinzo Abe — who faces only weak political opposition — to advance a broad legislative agenda that includes tougher law enforcement powers. A vote in favor of the bill by lawmakers was expected Tuesday.
Abe also wants his Liberal Democratic Party to come up with a concrete plan to amend the pacifist constitution, written by Japan’s American occupiers after its defeat in World War II.
“These moves show both Abe’s arrogance and his weakness,” said Koichi Nakano, a professor of political science at Sophia University and an outspoken critic of the Abe government.
“He has no rivals and is at the height of his power, so it feels like he can do anything. We’re seeing the personalization of power, and it’s not all that different from what we see in the Trump administration,” Nakano said.
But the moves are also an attempt to divert attention from simmering rumors of corruption, he said. The prime minister has been implicated in two shady deals but strongly denies any wrongdoing.
Against this background, Abe has been pressing ahead with an ambitious legislative agenda.

9小時 ·
Studio Ghibli, the animation firm co-founded by beloved anime director Hayao Miyazaki, plans to build a theme park dedicated to one of his most famous creations: My Neighbor Totoro. It's set to open in Japan in 2020.
翻譯年糕

Beloved Hayao Miyazaki Film Set To Get A Theme Park Of Its Own
My Neighbor Totoro has inspired a cult international following since its 1988 release. Now, Miyazaki's anime has inspired plans for a theme park, too —…
NPR.ORG