Lady Murasaki’s Masterpiece and Its Update

A Review of ‘Genji’s World in Japanese Wood-Block Prints,’ at Vassar College

Paulette and Jack Lantz Collection
“Bird” (1867), by Utagawa Fusatane, from the series “Genji and the Flowers and Birds, Wind and Moon."

Filled with romance, conflict, sex, adventure and the occasional malevolent visitor from the spirit world, the new print show at the Frances Lehman Loeb Art Center at Vassar College has so much going on that it would take a book to cover it. Actually, more than one — and it’s not surprising.

“The Courtesan Takigawa of the Kukimanjiya Reading Inaka Genji” (1838), by Utagawa Kunisada.
“Genji’s World in Japanese Wood-Block Prints” is essentially about two books: an 11th-century classic of world literature, “The Tale of Genji,” and its 19th-century parody, “A Rustic Genji by a Fraudulent Murasaki.” Installed in three galleries at the on-campus museum in Poughkeepsie, these 57 images are all derived from the Genji stories. But they do more than illustrate poetic or action-filled moments from a pair of linked fictions; they do more than delight the eye with a banquet of bold and subtle color, intricate patterning and superb draftsmanship.
The episodes they recount, so often set amid vistas of piercing natural beauty, also tell of the refined recreations and aristocratic rituals of classical Japan. They show the technological change and cultural ferment that arrived in the 19th century. And with astonishing detail, they report on fashions in clothing, hairstyles and décor. Then, to keep things really lively, they give us all this refracted by the theater, with images of Kabuki actors performing stage versions of the Genji tales.
The adventures of the handsome, womanizing prince named Genji have endured over the 10 centuries since Lady Murasaki Shikibu, a lady-in-waiting at the imperial court in Kyoto, first set them down. Sometimes regarded as the first modern novel, her story is a foundational work of Japanese culture — if a Western equivalent existed, it would have to be an amalgam of Homer, Shakespeare and Castiglione, who defined ideal Renaissance manners in his “Book of the Courtier.”
Genji’s moonlit trysts and complicated court intrigues have been supplying Japanese artists with inspiration and material through the ages, and the poet Ryutei Tanehiko (1783-1842) tapped into that tradition in 1829, when he began publishing “A Rustic Genji” as an illustrated serial — do we dare call it an early manga? His “Nise Murasaki Inaka Genji” became a runaway success.
His collaborator, Utagawa Kunisada (1786-1865), was already a popular printmaker, but the Genji wood blocks were a sensation, spawning not just additional prints but board games and playing cards as well. And with more than two dozen dazzling images — including the charmingly self-referential “Courtesan Takigawa of Kukimanjiya Reading Inaka Genji” — Kunisada dominates this show, along with his follower, Utagawa Kunisada II (1823-1880), who is represented by more than a dozen works.
“Genji’s World in Japanese Wood-Block Prints” opens with some examples of earlier illustrations related to the original tale. Then it quickly plunges us into the strangely time-warped world of the Kunisadas, in which the “Rustic Genji” hero Mitsuuji, who lives in the 15th century, follows in the footsteps of his 11th-century counterpart, Prince Genji, wearing 19th-century styles and gallivanting through a latter-day Japan that Lady Murasaki wouldn’t recognize.
The most enchanting of these prints show Mitsuuji, usually accompanied by several beautiful women, simply enjoying himself: boating, picnicking, sightseeing. He contemplates snow sculptures, flowering trees and naked ladies diving for abalone.
In “Illustration of a Cool Breeze at Takanawa in Tokyo,” by Toyoharu Kunichika (1835-1900), Mitsuuji and his female companions go for a ride, and we see modern Japan taking shape. It is 1870, and sedan chairs have given way to horse-drawn carriages; bearded, cigar-smoking foreigners are out and about, one on an early bicycle; and a pair of spanking-new telegraph poles with the wire strung between them frame the image, which, like many of the show’s prints, is in triptych format.
Steamships and a suspension bridge are among the other novelties that show up in Mitsuuji’s travels. But mostly we see him surrounded by more traditional imagery. In Kunisada’s “Enoshima in Sagami Province,” he visits an island shrine. A just-released crane carrying a letter sweeps across two of the three panels in Utagawa Fusatane’s “Bird” as Mitsuuji looks on. A whole flock takes to the air in Kunisada II’s “Eastern Genji Amid Pine, Bamboo and Plum,” with Mount Fuji just visible in the distance.
The show’s labels do a good job of explaining the cultural significance of the flora, fauna and other symbols that appear with such regularity in Japanese art.
But visitors won’t need help appreciating the sheer graphic power of these prints. In one of Kunisada’s most striking triptychs, from 1851, the drama of a Kabuki scene (acted by Ichikawa Kodanji IV, Kumesaburo III and Onoe Kikujiro II) is heightened by the slashing diagonals of his composition and the ominous, blood-red color of the long, unwound sash that visually links the three characters. It’s clear there will be no happy ending — except, of course, for us, and for Lady Murasaki, whose handsome prince shines on.
“Genji’s World in Japanese Wood-Block Prints,” Frances Lehman Loeb Art Center, Vassar College, 124 Raymond Avenue, Poughkeepsie, through Dec. 15. Information: fllac.vassar.edu or (845) 437-5632. 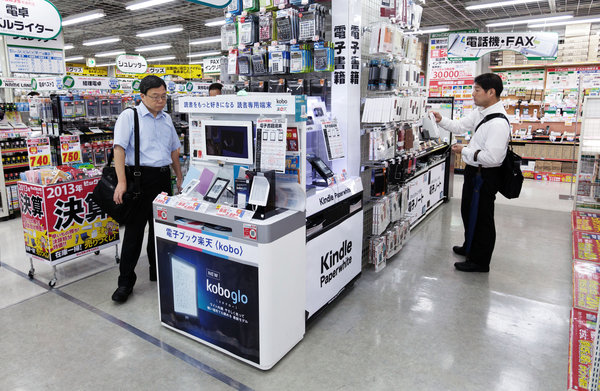 A SOMBRE exploration of love, responsibility and death, "Kaze Tachinu" ("The Wind Has Risen") is being described as Hayao Miyazaki's first film for grown-ups. Having spent half a lifetime making exquisite fantasies for children, Mr Miyazaki, now 72 and regarded as the reigning genius of Japanese cinema, has returned to tackle the true story of an aeroplane-maker who worked through the second world war.

The title is a reference to a line from a Paul Valéry poem, "Le Cimetière marin" ("The Graveyard by the Sea" 海濱墓園): "The wind is rising!...We must try to live." The wind is a portent for the disasters that anchor the movie: the 1923 Kanto earthquake, which levelled much of Tokyo and Yokohama and killed more than 100,000 people; and Japan's disastrous imperial war, over a decade later.

Despite its real-world setting, the film is saturated with the fantastical flourishes characteristic of Mr Miyazaki's earlier work. It is bookended with dreams. At the start, a ten-year-old boy named Jiro Horikoshi imagines flying above his provincial home, only to be awakened by bombs that fall from a hulking aerial warship. By the film's denouement, he is walking though the ruined landscape of wartime Japan, a nightmare wrought in part by his own boyhood dreams of flight.

He grows up to become a brilliant but naive engineer. The character of Jiro is based on the real Japanese designer of the Mitsubishi A6M Zero. In its time considered to be the world's best aerial fighter plane, the Zero enjoyed a terrifying reputation across the war's Pacific theatre. The Zero was on hand to open the war against America, by leading the attack on Pearl Harbour in 1941. By 1945 however, it had lost its technical edge. Then teenage kamikaze pilots were using Zeros as suicide bombs, ramming them into the approaching American fleets.
Born in the year of the Pearl Harbour attack, Mr Miyazaki is imprinted with the pacifism that is typical of Japanese from his generation. His movies are paeans to the natural world and warnings about its perilous state. In many, children are the first to warn of the dangers of greed and militarism, which inevitably fall on adults' deaf ears.

Fans have asked why the great pacifist film-maker has made a movie about a weapons-maker. Mr Miyazaki says he was drawn to the story of one of Japan's great eccentric geniuses. Engineers are neutral, he explained in June 2013. "It was wrong from the beginning to go to war," he said. "But…it's useless to blame Jiro for it."

Not surprisingly, in a country where politicians regularly stir up ghosts from the past, his film has triggered caustic debate. This month, Mr Miyazaki published an article in which he said he was "disgusted" by government's plans to upgrade Japan's army and navy and taken aback by how ignorant the politicians are of Japan's wartime history. Though he didn't mention him by name, it is clear that Mr Miyazaki's broadside was aimed at the prime minister, Shinzo Abe.

Conservatives have responded by telling Mr Miyazaki to stay out of politics. A popular online bulletin board, 2channel, is filled with furious comments that brand him as an anti-Japanese traitor. Worse, some have judged the new movie's sensual, slow-moving style and lack of digital fireworks to be "boring".

Mr Miyazaki's film feels very personal. His own father was the director of a company that made rudders for the Zero. Like Jiro, the young director grew up obsessed with aeroplanes. A swan-song, artistically and politically, "Kaze Tachinu" looks likely to outlive its critics and it's not doing badly at the moment either: It debuted this month at the top of Japan's box office.
©The Economist Newspaper Limited 2013
張貼者： hanching chung 於 下午8:15 沒有留言: