A party comes back from the dead, but still remembers where to find the switch for the printing presses 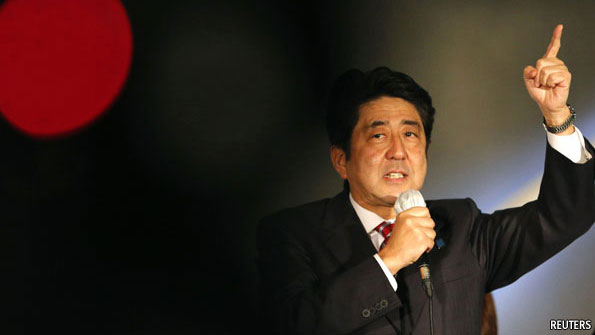 SHINZO ABE, who will become Japan’s new prime minister on December 26th, is wasting little time in offering the goodies. The leader of the Liberal Democratic Party (LDP), which staged a remarkable return to power in elections on December 16th, has made reviving an economy sapped by deflation the central goal of his “crisis-beating” cabinet. It is likely to start with pressure on the central bank to reflate the economy. A big dollop of public spending may follow (smothering the country in concrete is an old speciality of the party). As for Japan’s trade-damaging tensions with China, the hawkish Mr Abe wants to put them to one side for now.
His startling victory brings back a prime minister whose previous year in office, in 2006-07, was a shambles. It also brings back a party crushed in the general election of 2009. Mr Abe acknowledges that voters gave him a decisive victory not out of love for his party or ideas, but out of despair at the outgoing Democratic Party of Japan (DPJ) which, at war with itself, struggled to make policy. With a dozen parties, the election field was crowded, dividing the anti-LDP vote. One newspaper columnist described the LDP win as like choosing a plate of Japanese-style curry rice on a menu where nothing appeals: it was the least bad option. Meanwhile, the party’s formidable powers of organisation also counted for something.
In this section

With 325 seats, the LDP and its coalition partner, New Komeito, have a “supermajority” in the 480-seat lower house of parliament: that is, more than the two-thirds of seats necessary to override a veto by the upper house, which the opposition controls. Amazingly, the LDP achieved this despite notching up almost 4m fewer votes than when it was routed in 2009. Support for the DPJ collapsed, in other words. It was the third election in a row in which voters swung savagely against the incumbents. Given such volatility, it is too early to expect a comfortable LDP victory in an election for the upper house next July. Voters swinging like weathervanes are now the norm. But if offered decisive leadership—markedly absent for several years—they may yet prove more constant.
Mr Abe promises to put his energies into fixing the economy. As well as an even looser monetary policy to end Japan’s fifth recession in 15 years, he also calls for a burst of public spending of perhaps {Yen}10 trillion ($120 billion). It would be financed by more borrowing on the part of a state that already has debts of over 200% of GDP.
Japan’s big-business lobby, Keidanren, is underwhelmed by all this. It wants Mr Abe to boost productivity, for instance, by deregulating farming and medicine, both sources of LDP support. Still, presumably because investors bet that Mr Abe’s views may prevail upon the Bank of Japan, on the day after the election the stockmarket hit its highest level in more than eight months. A strong yen has reacted to “Abenomics” by skidding to a 20-month low of nearly {Yen}85 to the dollar.
Mr Abe is pressing the central bank to set a hard target for inflation, of 2%. At present the bank has no target, but rather a more loosely defined inflation goal, of just 1%. Feathers flew during the campaign as the Bank of Japan hotly defended its independence. But as T he Economist went to press, its board members were believed to be discussing an inflation target.
This suggests that the central bank wants a truce of sorts. It is not yet in the clear, however. Mr Abe has floated the idea of rewriting the central-bank law, which may curb its independence. He has toyed with the idea of issuing public bonds underwritten by the bank. Even if Mr Abe chooses not to carry out his threats—such “fiscal financing” is highly unorthodox—he may still seek to appoint a more like-minded central-bank head when the term of the governor, Masaaki Shirakawa, expires in April.
Mr Abe does not unveil his full cabinet until December 26th, though key figures are already known. One is 72-year-old Taro Aso, another former prime minister, and fan of manga comics, who led the LDP to defeat in 2009. Mr Aso is rumoured to be the next finance minister. He will want to ensure economic growth that both helps the LDP win the next upper-house election and allows the consumption (sales) tax to be raised in 2014—a crucial step towards plugging the budget deficit.
Yoshihide Suga, a confidant of both Mr Aso and Mr Abe, is expected to have the crucial role of chief cabinet secretary and government spokesman. Some fear that the new leader may pick a cabinet of friends, as he did in 2006, with disastrous results. Yet Mr Abe has also retained a pragmatic former rival, Shigeru Ishiba, as the party’s secretary-general. It may be a sign of tolerance for those outside his clique.
Hanging over Mr Abe are two questions. One has to do with the physical and mental strength of the 58-year-old. Mr Abe stepped down in 2007 under immense strains. He says he is now taking proper medication for his long-standing bowel disorder, which is affected by stress.
The other question is Mr Abe’s nationalism and his tendency to gloss over or even deny the worst of Japan’s wartime misdeeds. At a time of heightened tensions over territorial disputes, he has it in his power to undermine Japan’s standing with China and South Korea, while putting off ordinary Japanese at home.
Tomohiko Taniguchi, a former foreign-ministry official now at Keio University, says Mr Abe will seek to strengthen relations with America, after a rocky patch under the DPJ. Closer relations with Asian democracies, including Australia and India, will follow. But although improving ties with China and South Korea will be a lower priority, Mr Taniguchi says, Mr Abe has learned from the “painful failure” of his earlier term in office, when all his talk about “patriotism” and “righteousness” carried little weight with voters.
He has not said whether he wants to take Japan into the Trans-Pacific Partnership (TPP), an American-led free-trade grouping. The Keidanren is strongly for it. Farmers and other LDP backers are against. Mr Abe seems privately to be in favour.
Whether or not Japan’s neighbours let him brush off tensions with them over territories and history may depend on their new leaders. The attitude of China’s Communist Party chief, Xi Jinping, is unclear: pragmatism may trump dislike for Mr Abe’s views. As The Economist went to press, South Korea was electing a new president. Mr Abe, who is the grandson of a former prime minister once accused of war crimes, has refused to say whether or not he will visit Tokyo’s Yasukuni shrine, which honours convicted war criminals among Japan’s war dead. If he does go, he can expect a backlash from neighbours.
Should Mr Abe refrain and set about reviving the economy instead, however, it would do wonders for Japan’s standing abroad. It would also be an unexpected thank you to the voters who cheerlessly put him into office this week.
張貼者： hanching chung 於 上午1:47