Japan Sees a Chance to Promote Its Energy-Frugal Ways

A view through a window looking onto a commercial complex in Chiba, Japan, that uses transparent solar panels on window glass to generate power.

KUMAGAYA, Japan — With its towering furnaces and clanging conveyer belts carrying crushed rock, Taiheiyo Cement’s factory looks like an Industrial Revolution relic. But it is actually a model of modern energy efficiency, harnessing its waste heat to generate much of its own electricity.

Skip to next paragraph 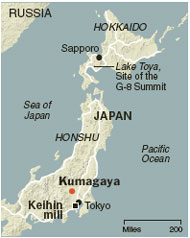 The Keihin mill captures heat and gases to generate power.

Engineers from China and elsewhere in Asia come to study its design, which has allowed the company to slash the amount of power it buys from the grid.

The plant is just one example of Japan’s single-minded dedication to reducing energy use, a commitment that dates back to the oil shocks of the 1970s that shook this resource-poor nation.

Now, with oil prices hitting dizzying levels and the world struggling with global warming, the country is hoping to use its conservation record to take a rare leadership role on a pressing global issue. It will showcase its efforts to export its conservation ethic — and its expensive power-saving technology — at next week’s meeting in Japan of the Group of 8 industrial leaders.

“Superior technology and a national spirit of avoiding waste give Japan the world’s most energy-efficient structure,” Prime Minister Yasuo Fukuda said in a speech outlining his agenda for the meeting. Japan “wants to contribute to the world,” he said.

Mr. Fukuda has already urged the leaders of the Group of 8 nations to adopt numerical targets as they discuss new ways to curb carbon dioxide emissions, a focus of treaty talks aimed at a new global agreement by the end of 2009. The existing pacts, the original climate treaty from 1992 and the Kyoto Protocol, which expires in 2012, have been called failures by energy and climate experts.

The rising cost of energy is expected to dominate the meeting, on Hokkaido, the northern island of Japan. President Bush and other leaders are facing calls to expand offshore drilling and to rein in hedge funds and other investors blamed for speculating on world energy markets.

Japan is by many measures the world’s most energy-frugal developed nation. After the energy crises of the 1970s, the country forced itself to conserve with government-mandated energy-efficiency targets and steep taxes on petroleum. Energy experts also credit a national consensus on the need to consume less.

It is also the only industrial country that sustained government investment in energy research even when energy became cheap again.

“Japan taught itself decade s ago how to compete with gasoline at $4 per gallon,” said Hisakazu Tsujimoto of the Energy Conservation Center, a government research institute that promotes energy efficiency. “It will fare better than other countries in the new era of high energy costs.”

According to the International Energy Agency, based in Paris, Japan consumed half as much energy per dollar worth of economic activity as the European Union or the United States, and one-eighth as much as China and India in 2005. While the country is known for green products like hybrid cars, most of its efficiency gains have been in less eye-catching areas, for example, in manufacturing.

Corporate Japan has managed to keep its overall annual energy consumption unchanged at the equivalent of a little more than a billion barrels of oil since the early 1970s, according to Economy Ministry data. It was able to maintain that level even as the economy doubled in size during the country’s boom years of the 1970s and ’80s.

Japan’s strides in efficiency are clearest in heavy industries like steel, which are the nation’s biggest consumers of power. From 1972 to 2006, the Japanese steel industry invested about $45 billion in developing energy-saving technologies, according to the Japan Iron and Steel Federation.

The results are visible at the Keihin mill on Tokyo Bay, run by Japan’s No. 2 steelmaker, JFE Steel. Massive steel ducts snake from the blast furnaces and surrounding buildings. These capture heat and gases that had previously been released into the air or burned off as waste. Now, they are used to power generators that produce 90 percent of the plant’s electricity. (The plant’s main fuel remains the coal used to heat its huge blast furnaces.)

Such innovations allow the mill to produce a ton of steel using 35 percent less energy than it did three decades ago, said Yoshitsugu Iino, group leader of JFE Steel’s climate change policy group. Mr. Iino calculates that if the global steel industry adopted Japanese conservation measures, it could reduce carbon emissions by some 300 million tons a year.

But even with corporate efficiency gains, Japan’s emissions of carbon dioxide, the main greenhouse-gas emission from human activities, have grown, largely because of rising living standards and continued reliance on coal, according to climate scientists. James E. Hansen, NASA’s leading climatologist, sent an open letter to Mr. Fukuda on Thursday seeking a greater commitment to emissions cuts.

At next week’s summit meeting, Japan plans to back an initiative that could make its frugal energy levels the new standards for global industries.

Now, its government is pushing an initiative that could set Japan’s levels of energy conservation as targets for global industries. Mr. Fukuda has proposed what is called a sector-based approach to new targets for reductions in greenhouse gas emissions. This means is setting the same numerical goals for all companies in an industry, regardless of location. The Kyoto Protocol set mandatory national limits for industrialized countries.

The sector approach has been embraced by Japanese industry groups, which say their high levels of efficiency should become the global standards. This would also give Japanese companies more opportunities to sell their energy-saving technologies and skills around the world.

The Bush administration has focused on developing sector-by-sector partnerships with Japan and other countries to find ways to curb emissions, but remains opposed to mandatory limits.

Kawasaki Heavy Industries, which makes the waste heat generator at the cement factory in Kumagaya, started developing the technology in 1979. But the generators were too expensive to sell outside Japan while energy prices were low. But overseas orders took off three years ago, after energy prices began rising.

Since then, the company has sold 64 units, mainly through a joint venture in China.

“Japan rushed to embrace these technologies back in the 1980s,” said Katsushi Sorida, head of the waste heat plant department at Kawasaki Plant Systems, a subsidiary that markets and installs the units. “Now the rest of the world is finally catching up.”