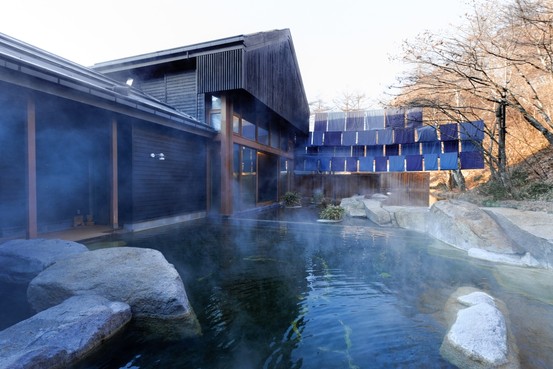 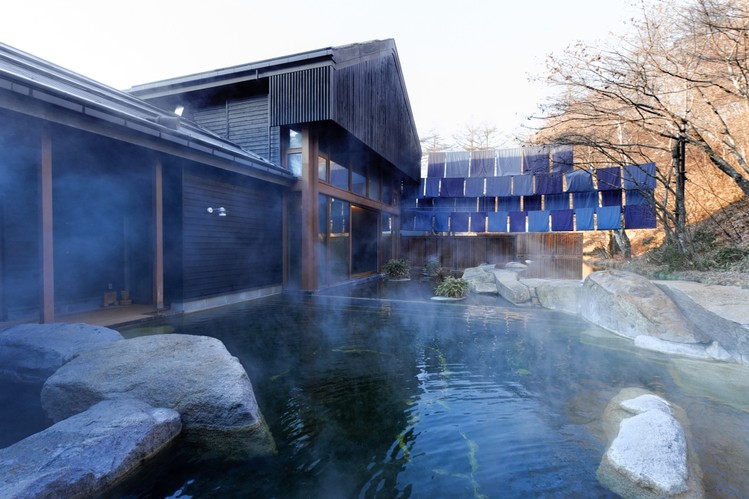 Corbis
A thermal spring in Karuizawa
I WAS SITTING in a tidal pool on the cold, windy beach of an ancient volcanic island 60 miles off Japan's southwest coast. The ocean pounded the beach's rocks a few feet away. The lean Japanese man sitting next to me had left his bike shorts in a pile on the ground behind a seaweed-strewn rock, just opposite my discarded clothes. My fellow bather and I shifted our gazes between the oncoming waves and one another. It was all a bit awkward, but neither of us budged. 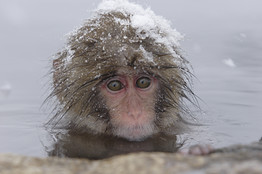 Yamanouchi Town/JNTO
Click to view slideshow
We were in one of Japan's celebrated onsen, the natural thermal baths found all over the volcanic island nation. I had come to spend a week exploring the country's variety. My itinerary included hot black-sand onsen, those with postcard-shaming views of Mount Fuji and even remote mountain hot springs frequented by red-faced snow monkeys.
Onsen traditionally refers to geothermal-water springs. The word can also apply to bathing facilities built around the springs. They are usually gender-segregated and feature both indoor and outdoor pools.
The baths are a cornerstone of Japanese culture; the nation's love affair with onsen dates back to the eighth century. Bathing in one is believed to improve circulation and relieve any number of aliments, including arthritis and stress. Another noted benefit is the waters' ability to break down barriers via "hadaka no tsukiai" (naked companionship) in a homey atmosphere. 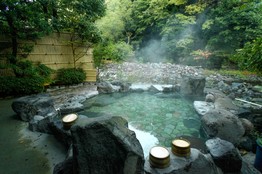 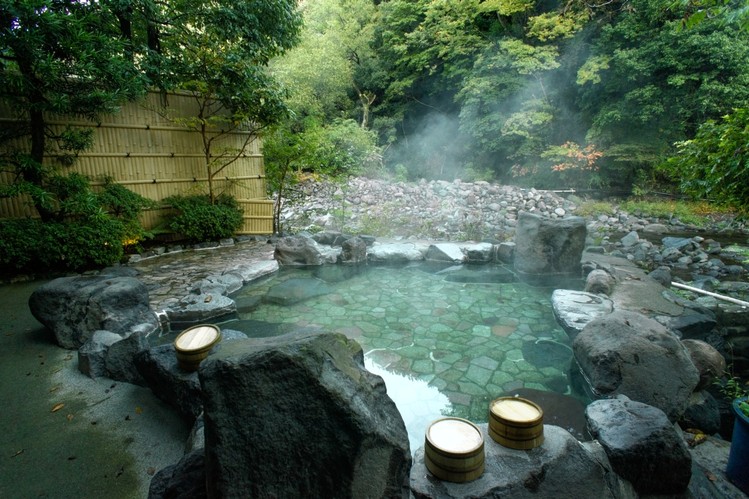 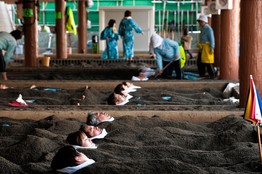 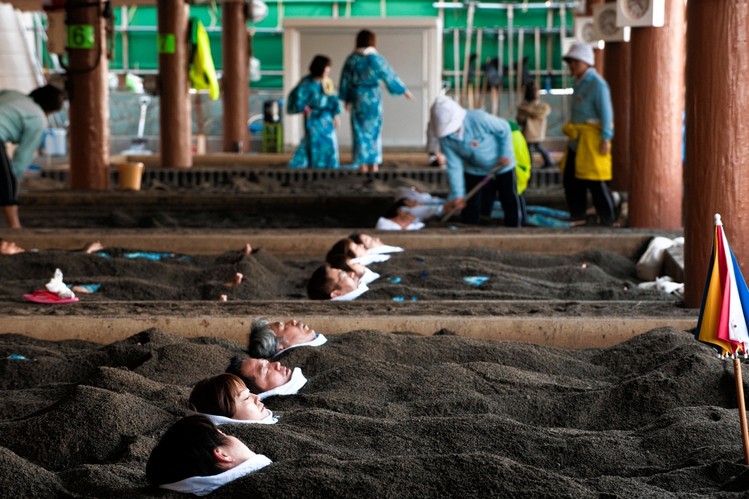 Hemis/Alamy
SUPERIOR SANDBOX | A crowd enjoys a hot sand bath on the beach of the sunamushi onsen in Ibusuki.
Hirauchi Kaichu onsen, the tidal pool in which the man and I were poaching, is on Yakushima, an island whose cedar forest earned a spot on Unesco's World Heritage List (and was the inspiration for Hayao Miyazaki's anime classic "Princess Mononoke"). There were none of the appurtenances that usually accompany these baths—no changing room, no yukuta (bathrobe), no vanity mirror and stool. This was onsen in primal form.
I had showed up with throbbing feet after a day of hiking. Slipping into the hot bath was instant relief, both for my muscles and my mind (naked stranger notwithstanding). The experience beat any massage.
I departed Yakushima determined to find other onsen that would offer satisfaction of equal caliber. A hydrofoil ride over the tumultuous East China Sea led me to the city of Ibusuki, which dangles off Kyushu, the southernmost of Japan's four main islands. Ibusuki is legendary for its sunamushi onsen, dry sand baths heated by subterranean lava. I had booked a stay at Ibusuki Hakusuikan hotel, which claims the town's best sunamushi and 25 baths of varying salinity and temperature.


“A benefit of note is their ability to break down barriers via 'hadaka no tsukiai' (naked communion) in a homey atmosphere.”

After checking in, I headed to the sunamushi, a long strip of black sand behind the 25 baths. An attendant dug a sand pit for me. He then instructed me to lie down in the hole before shoveling scorched sand over my body. It felt like the beginning of a "Twilight Zone" episode—one where the curious travel writer is buried alive. I winced while shovelfuls of black sand flew my way.
The sunamushi is purported to remove toxins and smooth the skin. Though 10 minutes in the sulfurous sand is recommended, I was profusely sweating within two. Just when I thought I wasn't going to make the 10-minute mark, two demure women appeared in the sand next to me. They giggled as the attendant began to bury them. I stayed the course and sweated out a week's worth of beer.

Rub-a-Dub in Your Home Onsen

Turn your bathtub into a Japanese hot spring 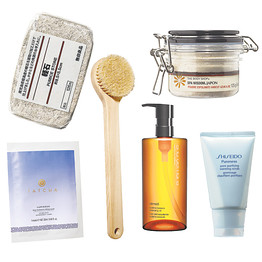 F. Martin Ramin for The Wall Street Journal (4)
Click to view interactive.
Not all onsen outings are tests of endurance. Hakone is a popular mountain resort town in the Kanagawa Prefecture, southwest of Tokyo. Views of Mount Fuji don't come better than those from Hotel Green Plaza Hakone's onsen, which is fed by Sengokuhara, one of the area's major hot springs. As is the case at most onsen, clothing is forbidden; show up wearing a bathing suit, as I did, and you will be scolded.
Soon after my arrival, I beelined to the hotel's outdoor bath and slipped beneath its steam-topped waters. I sat still, watching the moon float through an inky sky. After my soak, I shuffled to dinner in nothing but my robe and wooden geta sandals, standard issue at most onsen and generally the expected postbath dinner wardrobe. 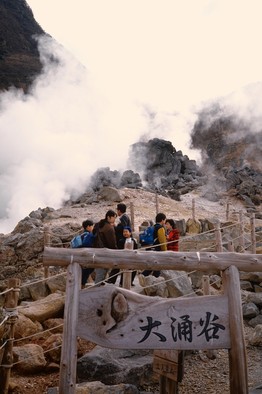 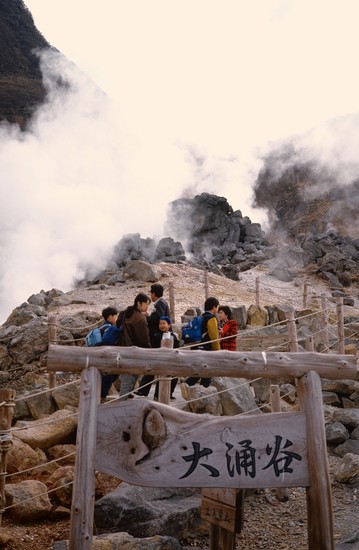 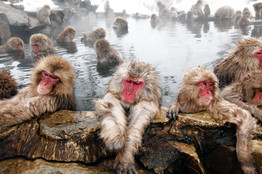 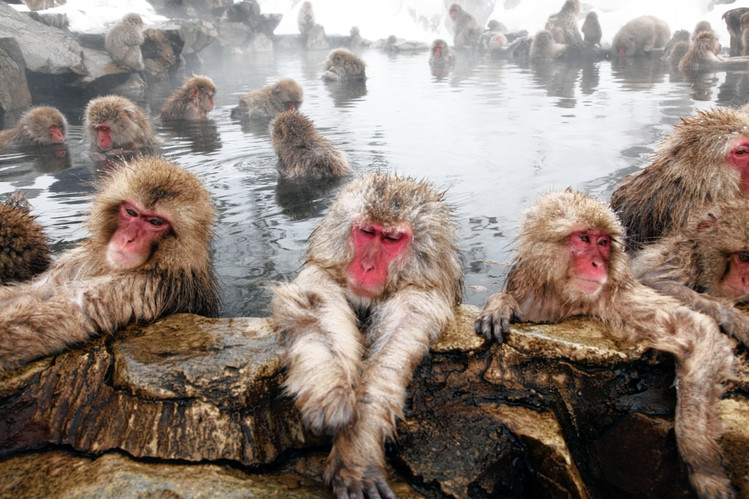 Zuma Press/Alamy
Monkeys in a hot spring at Jigokudani Yaen-koen National Park
Morning onsen rituals can differ from their evening counterparts, so I revisited the site of my moon bath at daybreak. Instead of the beguiling night sky, I saw Mount Fuji in all its symmetrical, snow-capped splendor. Before long, a fog moved in and Fuji-San vanished. I was reminded of 17th-century Japanese poet Matsuo Basho's words, "How pleasant, just once, not to see Fuji through mist."
My short time in Hakone ignited a craving for more transcendent soaks. I hopped on the Shinkansen bullet train to Nagano Prefecture, whose Southern Japanese Alps are home to several onsen. One such bath, in Jigokudani Yaen-koen National Park, is reserved for wild Japanese macaques (also known as snow monkeys). I made a reservation at Hoshinoya Karuizawa, a posh hotel modeled after a ryokan (traditional Japanese inn). The hotel boasts an ultramodern onsen and offers a snow-monkey package for those who wish to see these gray-furred, wily creatures.
The Nagano town of Karuizawa is the Hamptons of Japan, with a full-time population of about 18,000 and a surge of summer residents that includes members of the Japanese royal family. The town's public onsen was relaxing enough, but the resort's private baths were what I was after. They're open from 4 p.m. to 11 a.m., and divided into three chambers, each with less light than the last. The third chamber's only illumination comes from a narrow window that lets in a shaft of light.

The Lowdown: Dipping Into Japan's Onsen 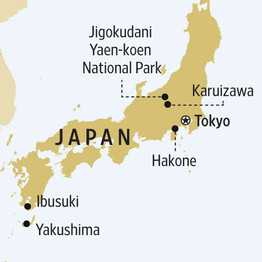 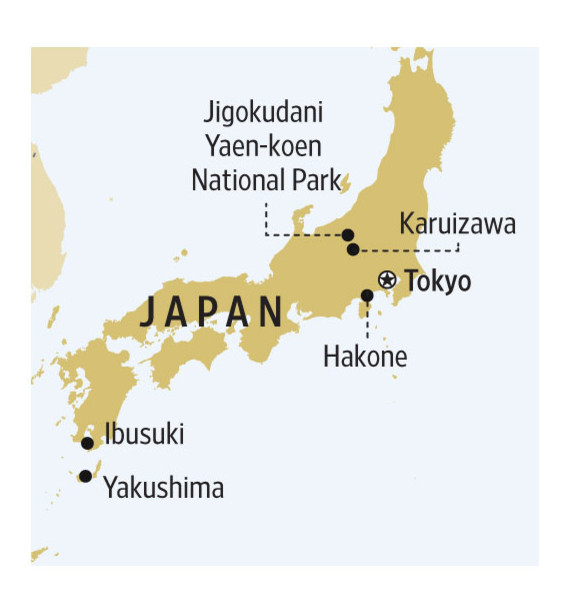 Getting There: A 14-hour flight from New York's John F. Kennedy International Airport takes you to Narita, where you can board a JR train. A seven- day unlimited JR train pass ($306, must be purchased outside Japan, japanrailpass.net ), is the wisest choice for visiting onsen, many of which are in rural areas serviced by rail. When commuting between Kagoshima and Yakushima, you can take the two-hour Toppy ferry ($145 round-trip, 81-09-9255-7888). Alternately, Japan Airlines offers a 35-minute flight between Kagoshima and Yakushima Airport.
Bathing and Staying There: Yakushima's Hirauchi Kaichu ($1, yakushima-yh.net ) is a bare- bones oceanfront onsen, accessible for two hours before and after low tide. Ibusuki's Hakusuikan Hotel (rates from $156, hakusuikan.co.jp ) has 25 natural baths and a restorative volcanic-sand bath; Hakone's Hotel Green Plaza (rates from $130, www.hgp.co.jp ) is beloved for its views of Mount Fuji; Hoshinoya Karuizawa (rates from $355, global.hoshinoresort.com ) is a luxury hotel with an ultra-mod onsen. Jigokudani Yaen-koen National Park is home to bathing wild snow monkeys ($5 admission; open 9 a.m. to 4 p.m.; jigokudani-yaenkoen.co.jp ).
What to Bring: Most onsen provide robes, slippers and towels. Hiking shoes and waterproof outdoor wear for hiking dewy Yakushima and snowy Jigokudani Yaen-koen are a must.

I visited twice over the course of my stay; the first time during an afternoon with other guests, the second visit at night on my own. It was pitch black, and dead quiet. No crashing waves, no giggling, no Fuji-San haiku floating through my head—just me in a dark, warm, sensory-deprivation bath for 15 minutes. This alone was worth the flight.
The next day, I set out with a hotel guide to see the snow monkeys. This required a 90-minute drive followed by a 45-minute hike—short enough to allow for a quick visit, but long enough to deter bus tours. Fat flakes of snow began to fall as my guide and I started up the path that leads to the famous baths of Jigokudani Yaen-koen.
The higher we climbed, the denser the snow became. Because we had started early, I had assumed we would be the first people to reach the onsen. Yet a bevy of Japanese grandmothers in sensible shoes streamed down the mountain, each greeting me with a hearty "Ohayou!"
Twenty minutes later, we arrived at the steamy pool. It was choked with monkeys, their fur wet, their faces bright and red as October apples. They sat still, presumably enjoying the toasty temperature, just as the naked stranger on Yakushima and the two women in Ibusuki had.
The baby monkeys were especially endearing—not so the adults, who had formed a daisy chain and were busy picking parasites off each other. This wasn't an onsen you'd want to dip into, though now that I was a true convert to these waters, I could almost understand why many people have tried.
張貼者： hanching chung 於 上午6:57