Revolution in the air/10 new results for Japan

Revolution in the air

After the central bank’s radical moves, now is the time for the prime minister to show his mettle 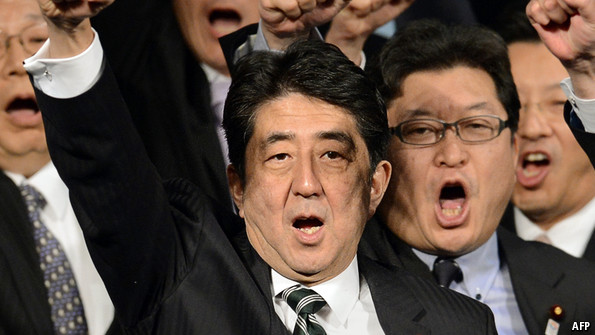 WHEN Shinzo Abe’s Liberal Democratic Party (LDP) won in a landslide in December, the new prime minister promised leadership after years of shambles. He pledged radical measures to snap Japan out of its long economic funk and restore pride to a country nearly overwhelmed by a sense of decline. On April 4th the man whom Mr Abe pushed forward as the new central-bank governor, Haruhiko Kuroda, unveiled the first concrete steps to suggest that Mr Abe means business. Mr Kuroda promised a “new dimension in monetary easing” in order to rid Japan of the deflation that has been its curse for more than 15 years. By Japanese standards, Mr Kuroda’s measures amount to a revolution.
Thanks to deflation and low growth, in nominal terms Japan’s GDP is no higher than it was in 1991. To have any chance of shaking the country out of its deflationary psyche and of meeting Mr Abe’s call for an inflation target of 2%, Mr Kuroda had to exceed already high expectations. He did so handily. He said that the central bank would expand its balance-sheet by the equivalent of over 1% of GDP a month—twice the rate of America’s Federal Reserve. He promised to double base money within two years. He also promised to double the central bank’s holdings of government bonds. And he said that the new course would continue for as long as necessary.

The prices of shares and government bonds have leapt, while the yen has slumped (see article). That is all part of Mr Kuroda’s strategy. In particular, he promises to hoover up longer-dated bonds and so bring their yield down; the central bank plans to raise the average maturity of its bond holdings from three to seven years. The hope is that private investors and banks now shunning risk by owning government bonds will be forced to seek higher yields elsewhere: either abroad (so weakening the currency) or by investing in the real economy (so boosting demand).

It is a hugely bold experiment, with commensurate risks. If investors came to worry that the Bank of Japan is too successful at raising inflation they may dump Japanese bonds by enough to drive long-term interest rates up sharply, an unlikely but dangerous development with the national debt standing at 240% of GDP. Moreover, while deflation, like inflation, is ultimately the remit of monetary policy, Mr Kuroda’s cautious predecessors often pointed out that structural factors also played a role: a declining population, suppressed domestic demand, insufficient competition in many sectors and excessive hoarding of cash by risk-averse companies.


Now it’s your turn, Mr Abe
Those problems remain, and Mr Abe must be absolutely clear that Mr Kuroda’s boldness has to be met with even greater boldness on the government’s part in freeing the economy. He should tackle head-on the corporate sector’s excessive savings, for instance, by taxing retained earnings that are not invested. He needs to do more to get more women into the workforce. He must (against all his nationalist instincts) promote immigration. He must open up protected sectors—electricity, health care, farming—to competition. To that end, Mr Abe’s commitment to join the market-opening Trans-Pacific Partnership is welcome. Yet the fight with the farm lobby (see article), which has held the LDP in its palm, has barely begun.

A gauge will be how much Mr Abe capitalises on his high popular ratings in the run-up to crucial upper-house elections in July to press for change. His actions over the coming months will help to determine whether he proves to be Japan’s saviour or—by promoting only a highly unorthodox monetary experiment—its bane.