How Japan's Sharp Lost Its Edge

'We Haven't Had a Good Understanding of the Market,' Electronics Maker's Next President Explains


By DAISUKE WAKABAYASHI And JURO OSAWA

TOKYO—Sharp Corp.'s 6753.TO -0.78% domestic liquid-crystal-display factories once made the company a source of pride for Japan's electronics sector. Now it has taken on a less impressive mantle: Symbol of a sector struggling to compete globally.

"Severe" is how Sharp's incoming president described the situation to reporters on Monday.
Sharp expects this fiscal year to record the biggest annual loss in the company's 99-year history. The company suffered from weak demand across most of its largest product lines—television sets, LCD screens and solar panels—with a strong yen hurting cost-competitiveness. 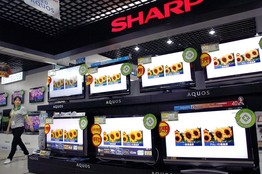 Underscoring the difficult conditions, the world's No. 5 maker of TV sets said last week that it will replace President Mikio Katayama with Takashi Okuda, a 34-year company veteran and the head of its overseas operations.

"Even though we possess technology to make good products, we haven't been able to launch them in a timely manner because we haven't had a good understanding of the market," said the 58-year-old Mr. Okuda, who will take his new post next month. He offered little detail regarding what Sharp plans to do to halt losses.

On the heels of loss forecasts totaling ¥1.29 trillion ($15.46 billion) for the fiscal year that ends this month, Sharp, Panasonic Corp. PC +0.87% and Sony Corp. SNE -0.73% announced management changes. In each case, the new executive promised to speed up operations. All three companies, the titans of Japan's consumer-electronics industry, are suffering from losses at their TV-set businesses, failing to keep pace with the innovations of Apple Inc. AAPL +2.65% and unable to match the manufacturing might of Samsung Electronics Co. 005930.SE +1.78% 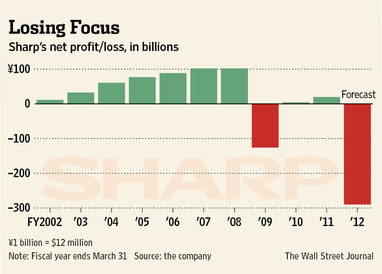 Sharp, the smallest of the trio, is especially vulnerable because of its aggressive investments in LCD and solar panels, where price competition has been brutal. Sharp also doesn't carry the brand cachet of Sony or Panasonic.

"What makes the situation really tough is that the very businesses Sharp bet on as its growth drivers are now the biggest drags on its earnings," said analyst Nobuo Kurahashi at Mizuho Investors Securities.

Sharp, whose 1915 breakthrough product was the "ever-sharp" mechanical pencil, has seen its recent fortunes rise and fall with liquid-crystal displays, a technology that Sharp first used in calculators during the 1970s.

After decades of research and development, Sharp cashed in when the TV industry shifted from bulky sets to sleek, flat-panel models in the early 2000s. With its strong LCD manufacturing legacy and state-of-the-art Japanese factories, Sharp's profit rose ninefold between 2002 and 2007. It dominated the Japanese TV-set market during those boom years, touting its domestic production as a sign of unmatched quality. Sharp continued to expand its production with increasingly ambitious LCD plants, including a $5 billion complex in western Japan in 2009.

But the good times came to a halt when the domestic TV market slumped last year after a government stimulus plan ended. Meanwhile, a global slowdown meant Sharp's customers needed fewer panels. The company was saddled with an inventory glut.

The solar business, another pillar of Sharp's operations, meanwhile is deep in the red. Since Sharp manufactures most of its solar panels in Japan, the strong yen has hurt its ability to export its panels at a competitive price. And solar-panel makers generally are facing tough conditions as low-cost Chinese manufacturers flood the market with supply. Demand in Japan hasn't met bullish projections and European sales have tapered off.

In the fastest-growing segments of the consumer-electronics industry—tablet computers and smartphones—Sharp's products haven't fared much better.

Sharp scaled back output of its Galapagos tablet less than a year after its debut. Sharp's smartphones fare well in Japan but have scant presence overseas.