Tsukiji fish market to survive on reduced scale after relocation

THE ASAHI SHIMBUN
A shopping mall reminiscent of the Tsukiji fish market is being planned at the site in Tokyo’s Chuo Ward when the popular market moves to the Toyosu district in neighboring Koto Ward.
The Chuo Ward government revealed its plans at a meeting Dec. 12 on redeveloping the Tsukiji area and keeping tourist numbers up.
The market’s relocation is expected to be completed by the end of fiscal 2014.
Ward officials said they want to create a marketplace, tentatively called the “Tsukiji new market,” on parking lots of the Tsukiji outer market, an area that currently features many retail shops and restaurants that sell fish, fruit and vegetables at low prices. The outer market is adjacent to the Tsukiji wholesale market.
“With the Tsukiji new market, we hope to retain the functions of today’s Tsukiji market on a reduced scale,” a ward government official said. “We want to differentiate it from the Toyosu market, which will be designed for bulk purchases.”
The Tsukiji new market will accommodate 79 fish shops and 14 vegetable and fruit stores, according to the plans. Store operators will be selected from among traders with at least five years of experience working in the Tsukiji market.
The ward government plans to construct a pair of two-story buildings, part of which has a third floor, on 4,000 square meters of ward-owned land now used for parking.
The ground floors will be split into 93 shop spaces each about 20 square meters in size. The second floors will be used as storehouses and offices for those shops.
The mall's main clients will be restaurant operators and other professionals in the food industry, but the ward also hopes to attract tourists to the area.
The ward plans to start accepting applications from would-be shop operators next spring, and start construction from between autumn and winter.
Work is scheduled for completion in fiscal 2014, and the ward hopes to open the mall a half year before the opening of the relocated fish market.
The ward said it will cover all construction expenses.

'I am not a number, I am an expensive tuna'

An auctioneer calls for bids on frozen tuna. (Yoshiyuki Suzuki)
This is the first in a series of articles on the Tokyo Metropolitan Central Wholesale Market, known as Tsukiji fish market.
* * *
It is early morning and Yuzo Nishida, a veteran auctioneer at Tokyo's Tsukiji fish market, is deciding what number to write on the belly of a tuna. He knows his decision could help decide his company's fortunes for the day.
The meaning of the numbers is simple. They show the order the fish will be auctioned. Lower numbers are generally supposed to indicate the best fish of the day, but Nishida, who has been working in the industry for 28 years, knows it is not quite as simple as that.
No one is chatting as he and his rivals weigh their tactics along the lines of more than 200 tuna.
Five companies serve as auction houses in the market. At dawn, their employees painstakingly set out their fish, ordered strictly according to their class: wild Pacific bluefin tuna, wild Southern bluefin tuna and farmed Pacific bluefin tuna.
Each fish is sprinkled with water and wiped down to show it to its best effect.
"(The quietness) is due to the tense atmosphere. If we can sell one fish (at a high price), we can earn a lot of money," an auction house employee explains.
The auctions all start at the same time at 5:30 a.m. and so the order each auction house chooses to sell its tuna is a complex calculation of the quality of your own fish compared with others.
Which fish will attract the buyers? How will it hold up against rival auction's offerings? Is it good enough to pull in the buyers and boost prices at the auction generally?
The quality of two tunas may be the same, but their prices can be very different depending on the ordering of the auction.
In the end, Nishida, 49, decides not to give his best fish of the day his number one pick.
He paints "1" and "2" in the customary red paint on the belly of two tuna from a company with a strong relationship with his employer, Tohto Suisan Co.
His favorite fish, from Oma in Aomori Prefecture, is given third place.
An employee of a rival auction house scrawls "1" on another fish from Oma, said to be the best of the day.
The bell rings and Oct. 5's auctions are underway. Buyers bunch around the auctioneers. Time seems to speed up. Nishida has started the auction for the third fish within 30 seconds.
A much larger number of buyers raise their hands for the number three fish, compared with the number one pick.
The price jumps, finishing at between 7,000 yen and 8,000 yen per kilogram.
"The price is relatively good," Nishida says with relief.


Not an eye socket or a jawbone is wasted

Heads of tuna at Tsukiji fish market in Tokyo's Chuo Ward (Ikuro Aiba)
This is the ninth in a series on the Tokyo Metropolitan Central Wholesale Market, known as Tsukiji fish market.
* * *
At 10 a.m., when the business at Tsukiji fish market is almost over, you will often see left-over tuna heads at the back of the wholesalers' shops.
But don't get the idea that they are destined for the garbage tip.
The Tsukiji traders insist that every part of a fish head can be cooked and eaten.
The flesh behind the eyeball, for instance, makes a good soup if the foam is skimmed off, say the traders. Add some seasoning and nosh it down with "enokidake" mushrooms, they suggest.
The top of the head, called "noten," can be eaten as sashimi (raw fish) if it is fatty or minced and mixed with chopped leeks.
Tuna cheek can make a tasty char-grilled steak, and the skin and jaw can be boiled and eaten with "ponzu" (soy sauce with citrus juice).
Parts of the head are also used as ingredients for cosmetics and sausages, according to the traders.
As you see a detached eyeball or noten, you can also savor a certain feeling of intimacy with the fish that is quite different from seeing chunks of flesh sold in kilograms to buyers from the sushi restaurants.
"There is no part that goes to waste in tuna," says a wholesaler. 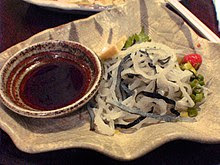 Ponzu shoyu (left) and fugu.
Ponzu (ポン酢?) is a citrus-based sauce commonly used in Japanese cuisine. It is tart, with a thin, watery consistency and a light yellow color. Ponzu shōyu or ponzu jōyu (ポン酢醤油) is ponzu sauce with soy sauce (shōyu) added, and the mixed product is widely referred to as simply ponzu.
The element pon arrived in the Japanese language from the Dutch word pons (which in turn is derived from and shares the meaning of the English word punch).[1] Su (酢?) is Japanese for vinegar, and hence the name literally means "pon vinegar".
Ponzu is made by simmering mirin, rice vinegar, katsuobushi flakes, and seaweed (konbu) over medium heat. The liquid is then cooled, strained to remove the katsuobushi flakes, and finally the juice of one or more of the following citrus fruits is added: yuzu, sudachi, daidai, kabosu, or lemon.
Commercial ponzu is generally sold in glass bottles, which may have some sediment. 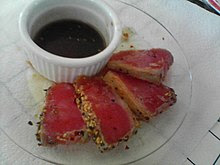 Ponzu shoyu and tuna steak.
Ponzu shoyu is traditionally used as a dressing for tataki (lightly grilled, then chopped meat or fish), and also as a dip for nabemono (one pot dishes) such as shabu shabu. It is used as a dip for sashimi. In the Kansai region, it is offered as a topping for takoyaki.