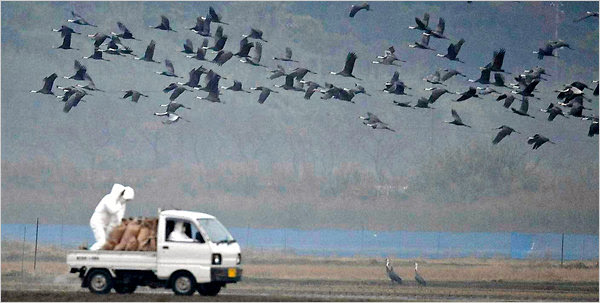 Japanese bird sanctuaries, poultry farms and zoos went on high alert last month after several species of migratory birds in different regions were found dead of what appeared to be H5N1 avian influenza.

The virus frightened flu specialists when it resurfaced in Hong Kong in 2003 and quickly spread throughout Asia and along bird migratory routes to Europe and Africa. It has not mutated to spread among humans, though it still kills them occasionally — Egypt reported its 38th death last month.

According to articles in the Japanese press gathered by ProMED, which monitors disease outbreaks, a hooded crane was found dead of H5N1 on the Izumi Plain in Kagoshima Prefecture in southern Japan. The plain is Japan’s largest wild crane wintering site, and the prefecture is the nation’s top poultry-raising area.

Meanwhile, in Tottori, several hundred miles north, a wild tundra swan was found on a house balcony dying of what was tentatively identified as the flu virus found on a poultry farm about four miles away. That set off a search of the area, turning up 23 more dead birds, which are being tested.

Farther north, in Toyama Prefecture, a dead mute swan led to inspections of nearby poultry farms and a decision by a park in Hyogo Prefecture, on Japan’s Inland Sea, to stop displaying its white storks, a national treasure, for fear that they would come into contact with infected wild birds.
張貼者： hanching chung 於 下午11:30